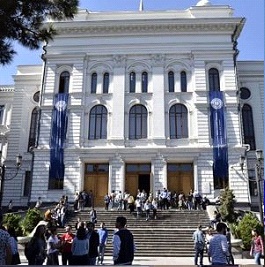 Ivane Javakhishvili Tbilisi State University was founded in 1918 and it is based in Tbilisi in Georgia. It is the oldest university in the Caucasus region as well as Georgia.

Ivane Javakhishvili was the main founder of the university and he was a Georgian historian and academist.

The university has five branches in the region of Georgia which includes six faculties including humanities, law, economics and business, medicine, and social and political sciences, a scientific library, seven museums, 60 scientific-research laboratories and centers, and a publishing house.With universities, educational and foreign scientific centers, like UNESCO, the University of Saarland in Germany, Brunel University in the United Kingdom as well as the Association of European Universities, and the Council of Europe, Tbilisi State University is associated.